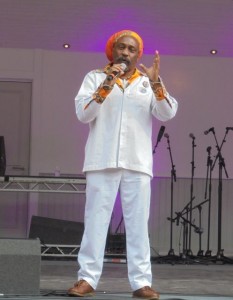 Jamaica was represented for the first time at Glasgow MELA Festival with dub poet Yasus Afari and reggae singer Claudius England performing before an appreciative audience at the bandstand stage. Between them they brought powerful messages about care for the earth and unity. Both artists were sponsored by Flag Up Scotland Jamaica who also had a stall at the festival where posters about the special connections between Scotland and Jamaica could beviewed. 200 people also signed a petition urging the Scottish Government to grant Jamaica prioritystatus for trade and development. 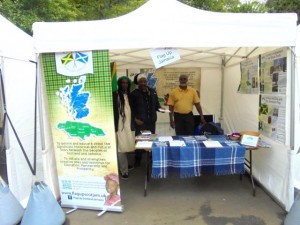 The Flag Up tent manned by Jamaican friends

After the MELA Festival, Claudius was able to stay in Scotland for a number of engagements in schools, prisons and churches. We are grateful to Claudius for doing a great job promoting Flag Up Scotland Jamaica wherever he went. On the Isle of Arran, he paid a visit to Brodick Castle where he viewed items from the famous Beckford collection funded by profits from slave worked sugar plantations in Jamaica. An article in The Arran Banner here records his reactions.  On the next day Claudius’s first school visit was at the island’s high school in Lamlash.

“There are not enough superlatives to describe the experience – the children loved Claudius. My staff had prepared in the run up to his visit and many pupils had favourite songs. Needless to say Claudius obliged with a request (Daddy) and they were elated. We had a tricky situation regarding a child with ASD – Claudius handled it masterfully and diffused the situation. He is extremely skilled in interacting with children and young people.”

Claudius England has frequently worked in prisons in Jamaica and he was able to visit three Scottish prisons – Shotts, Castle Huntly and Glenochil. Here are some descriptions of what proved to be memorable visits:

“Claudius is a very warm relaxed guy with a cool style that the guys responded to.  As well as singing he spoke about his life in Jamaica, about the culture there, about his decision when his son was born to sort his life out, and about his values as a Christian.  He also spoke about visiting a juvenile prison back home for 12-17 year olds, some of whom are starting out on long sentences for murder.  He asked our prisoners to – if they wanted – write a letter to the boys there giving them advice and hope.  I was impressed by how many prisoners did so and I read the sheaf of letters at the end to check for any security or inappropriateness concerns but found them actually quite inspiring and moving.”

“At our service in the prison yesterday the men who attended last week were still ‘buzzin’ and speaking about how good it was. I think what made the visit work so well is Claudius’ demeanour of ease. It was noticeable how relaxed he was as he engaged   with the prisoners in general chat over coffee.  He fitted in very humbly, graciously and with ease into whatever was happening. Nothing was a bother for him which made it such a pleasure.”

Claudius also shared his songs and stories at Kilsyth Anderson Kirk and at Balintore United Free Church in Ross-shire as well as taking part in an interview on East Coast FM for their Reggae show.